NARRATED BY KEVIN SORBO
BEFORE THE WRATH

AVAILABLE ON DVD, BLU-RAY AND DIGITAL

But concerning the times and the seasons, brethren, you have no need that I should write to you. For you yourselves know perfectly that the day of the Lord so comes as a thief in the night. 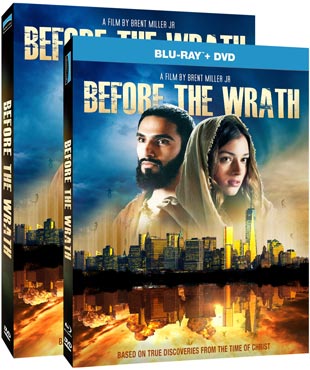 While scholars debate the timing of the Rapture, the world has lost why this event is prophesied to occur in the first place; knowledge that was once understood by those in the first century. Today, researchers in the Middle-East have rediscovered ancient anthropological evidence from the time of Christ that reveals exactly how and why the Rapture must occur; unveiling new biblical insight that will reignite hope for believers and prepare the world for what's coming.
Order Now

"This film will finally unite Christians on the Rapture in these last days."

A DISCOVERY FROM THE TIME OF CHRIST

Bible scholars continue to debate the timing of the Rapture, but why is such a mysterious event prophesied to happen in the first place? Is there a deeper understanding surrounding this occurrence that we've lost over the millennia that those living in the first-century clearly understood? Newly rediscovered ancient anthropological evidence from the time of Christ finally reveals unprecedented findings that could prove the upcoming Rapture is not only real to a skeptical world but sheds new light on how and why this event must take place. Regardless of your Tribulation Period views, "Before the Wrath" will captivate believers and non-believers alike; revealing new depths of theological understanding regarding what Jesus revealed to the ancient Galileans about the end of the world in ways you could never have imagined.
These findings resulted from 10-years of research in Israel by leading ancient anthropological scholars which rediscovered lost Middle-Eastern views regarding how and why the biblical "catching away" was prophesied to occur. While everyone has been debating "when" this event is to happen, we've forgotten to ask "why" it does, and the answer could be the greatest theological discovery of our time. To fully present the impact this genuine eye-opening discovery has on the world, award winning documentary writer and director Brent Miller Jr, reproduces what Jesus Christ Himself unveiled to the ancient Galileans regarding the end of the world through emotional and beautiful cinematic reenactments with over 60 actors and extras on a Hollywood set.

WATCH BEFORE THE WRATH

Containing one of the most knowledgeable rosters of theological researchers ever featured in an eschatological docudrama - each expert in Before the Wrath was either directly involved in the discovery being unveiled within the film or was a major contributor in the advancement of theological research and education. These experts are recognized worldwide and have been featured on various TV and radio programs including Fox News. Featured experts include:

Jack Hibbs
Theologist and Host of 'Real Life' on SiriusXM